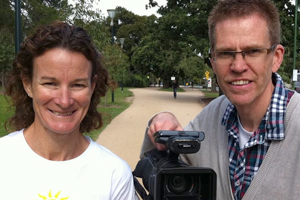 Olympic silver medallist and former World Champion Sonia O’Sullivan will take part in the Emer Casey Fun Run on May 22 at the Clayton Campus at the Monash University in Melbourne, in aid of ovarian cancer.

Sonia explains the event and encourages the whole family to support the cause. After the Run, she will return to Ireland for the Cork city marathon.

The 41-year-old is clocking up an impressive 100k per week but she denies that there is no truth in the story that she’s aiming to compete in London 2012!