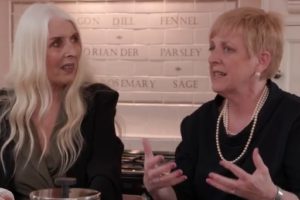 An excellent video highlighting the signs and symptoms of ovarian cancer was launched in Ireland on 8th May, World Ovarian Cancer Day.  The video, produced by Breakthrough Cancer Research, features four Irish women affected by ovarian cancer speaking frankly about their symptoms prior to diagnosis.  This is a superb way to highlight the signs and symptoms which have been usefully summarised by the acronym BEAT –

Bloating that is persistent and doesn’t come and go

Abdominal and pelvic pain you feel most days

Women who notice these symptoms are encouraged to talk to their doctor.  Cork woman, Anne Herlihy shares her story in the video.  “I wish I had known.  If I could go back and know that that chronic constipation I had for months was a symptom of ovarian cancer, things would be different.”

Mary McGrath, from Clare, reflects that “if I had known ten years earlier that this IBS was not IBS, I probably would have been caught at stage 2 or 1.”

“The symptoms of ovarian cancer can be confused with other illnesses.  However, the key difference is that these symptoms are persistent and do not come and go. The BEAT campaign is encouraging women to be aware of changes in their stomach, pelvis and abdomen and to speak to their GP where they are concerned.”

We are indebted to Anne, Antoinette, Brenda and Mary who shared their stories.  The Emer Casey Foundation encourages everyone to watch the video and to share it with the women they love.

View all posts by Anne O'Leary →