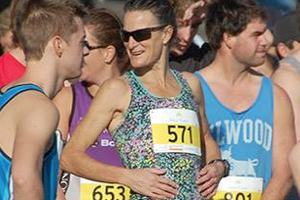 When Irish Solicitor Emer Casey died of ovarian cancer in June 2006 at the age of 28, her family vowed to do all they could to help progress research into early detection of the disease known as “the silent killer”. The Emer Casey Foundation was established in Emer’s Memory and this is the eighth year of the Emer Casey Fun Run for Ovarian Cancer in Melbourne. The money raised is donated to support the Peter MacCallum Cancer Centre.